Philip Wingeier-Rayo: A Small Victory for Missions at General Conference

Among all the polemics and fireworks discussing human sexuality at General Conference over 10 days, this small petition of $30,000 for mission opportunities in Latin American and the Caribbean almost fell through the cracks. Fortunately this petition (No. 60874) "Holistic Strategy on Latin American and the Caribbean" passed by an overwhelming margin. This demonstrates to me that in spite of our differences the United Methodist Church is still a missional and generous people. I have attached below the link to the original petition describing the missional opportunities and the conditions of poverty in the 20 countries in the region of 502 million people.

While I'm pleased that this passed, it makes me wonder what we could do if we spent less money on debating other issues and having large world-wide gatherings. This General Conference cost $10,532,800 and 32% of this was spent on delegate travel with the bulk of this being international airfare for the 350 Central Conference delegates.

I know that the United Methodist Church is not synonymous with the U.S., but my question is why do we have United Methodists so far away in Europe, Africa and the Philippines, when right here in Latin America—with so much need—we don’t have a United Methodist Church? None of the 350 international voting delegates were from Latin America. I know that there are great needs around the world and the UMC does wonderful ministries everywhere it is present, I'm just asking if this money couldn't do more good for more people closer to home?

The United States also has much more in common with Latin America historically, economically and geographically. Even culturally the U.S. now consumes more salsa than ketchup and it’s hard to find a town in the U.S. without a Latin American restaurant. Words such as tortilla, jalapeño and hurricane originate in Latin America and the Caribbean are are now part of our vocabulary. Also, the Hispanic population in the U.S. is currently 55 million (17.3%) and increasing, which represents a huge mission opportunity in our midst. The U.S. Census predicts that this demographic will be 31% of the U.S. population by the year 2060. By contrast, there were only about 20 Hispanic delegates at the 2016 General Conference to help lift and interpret this opportunity to the body.

The UMC does have historic relationships with Methodist Churches in Latin America and the Caribbean that were established by missionaries in the late 19th century, however most of these churches were encouraged to become autonomous in the late 1960s.[1] These autonomous affiliated churches retain fraternal ties through comity agreements, but do not have nearly as much financial support as the Central Conference churches.

Greater mission involvement of the United Methodist Church with partnerships in Latin America & the Caribbean could make more disciples of Jesus Christ for the transformation of the world. The Volunteer in Mission movement began when the Western North Carolina Conference began sending mission teams to Costa Rica in the late 1950s. Since then, thousands of United Methodists have served in short-term mission trips in the Americas. Of course, there are mission trips to Africa and Asia, but because of the cost and the distance, these are much less common. These mission trips function best (for the senders and the receivers) when there are long-term partnerships carried out in a spirit of mutuality and respect.

Greater UMC involvement in Latin America could support churches and ministries that would improve the quality of life in the region. There was a wonderful video presentation at GC on Wednesday (5/18) highlighting the ministry of Acción Medica Cristiana where GBGM missionary Belinda Forbes is assigned. This ministry promotes health and development in rural Nicaragua.

I believe that the UMC has done a wonderful thing in founding and building Africa University. This institution is training bright young people from several African nations who will be part of solving regional problems well into the future. At the same time, the oldest Spanish-speaking seminary founded by the Methodist Church in South America, ISIDET in Buenos Aires closed its doors last year because of lack of funding, thus creating a void for Spanish speaking theological education in South America.

What would it look like to build a Latin American University similar to Africa University? Could such a university help to train young people who could help solve problems in Latin American societies? Could future Christian-grounded leaders educated at such an institution promote more stable democracies in the region, Christian ethical values, businesses with more job opportunities, more equal distribution of resources, and creative solutions for environmental and societal issues that affect the Western hemisphere? More just societies in Latin America and the Caribbean with stable democracies would make emigration to the north less desirable. 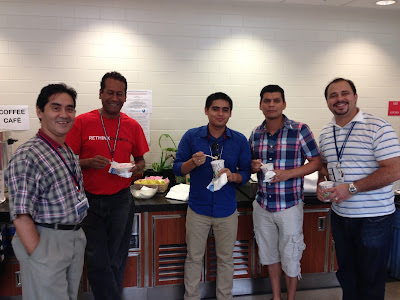 Since there already exists autonomous Methodist Churches throughout Latin America and the Caribbean, I am not actually advocating starting United Methodist Churches; however, I am encouraging the UMC to re-evaluate its global structure and see where its resources can do the most good. I recommend consulting with our historical partners before beginning any new initiatives to ask how we can be of assistance to support what God is already doing. This petition is a good model of mutuality in mission as this request was made in consultation with the Council of Methodist Churches in Latin America and the Caribbean (CIEMAL), which is the corresponding representative body. My only question is whether or not $30,000 is enough and whether the current global structure is in the best interest of the U.S. based UMC?

In an ideal world with unlimited resources we could have UMC ministries in every country, however we are forced with difficult stewardship questions. I know that there are needs everywhere and we’d like to help everyone, but this time of numerical and budget decline could be used as an opportunity to reflect on the best way to organize the UMC and be wise stewards of God's resources. In conclusion, I’m pleased that Petition #60874 passed and that Latin America and the Caribbean will receive $30,000 for missional opportunities, it just seems like such a small amount compared to the $10 million that we just spent to host 864 delegates for a 10-day meeting and the ongoing commitments that we sustain as a global church.


[1] With the exception of the Methodist Churches in Brazil and Mexico that gained its autonomy in 1930, and the United Methodist Mission in Honduras that started in the early 1990s.
Posted by David W. Scott at 12:59 PM